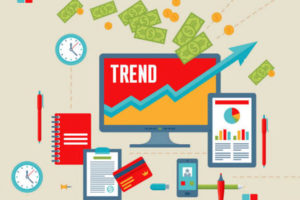 Social media is changing at a rapid pace.

For example, the content format Stories was introduced on several major social media platforms slightly more than a year ago. Now, it’s one of the most popular content individuals are posting. More than 300 million people are sharing stories on Instagram and WhatsApp separately every day, and 70 million people were posting daily to Messenger Day just six months after its launch1.

Due to its popularity, many businesses are now posting stories regularly, too.

To succeed on social media, it’s essential to stay ahead of the curve and understand the latest social media trends.

Social media is one of the best ways to reach your target audience because of its sheer size and the amount of data available.

Here are the current user base of the six major social media platforms:

You can see the growth of the respective social media platforms in the following few slides:

We are becoming glued to our smartphones.

On top of these statistics, comScore’s 2017 U.S. Mobile App Report found that 78 percent of social media time is spent on mobile devices.

This trend increases the importance of creating mobile-friendly or mobile-first content. A few things you could do include creating images with the recommended size that will be displayed fully on mobile or creating square or vertical videos, which will take up more real estate on the phone screen than landscape videos when viewed vertically.

The growth in social messaging is not showing signs of slowing down. Despite having three years of double-digit growth, the number of mobile messaging users is still growing at a significant rate.

If social media has been a great opportunity for businesses, then social messaging cannot be ignored. And it is already showing tremendous benefits for businesses.

People used to communicate with businesses via the phone, then emails, and then social media. Now, it’s social messaging.

Facebook studied the messaging behavior of 12,500 people across 14 markets to understand consumers’ growing preference for messaging businesses. They found that messaging is helping businesses connect with their customers more than ever. Consumers use messaging to ask businesses questions, make appointments and purchases, and provide feedback.

Here are some other findings:

Consumers’ preferred way of communicating with businesses has always been shifting. Now, they are shifting towards social messaging. Is your business ready to receive your customers’ messages?

5. Chatbots are becoming the norm

As Facebook Messenger grew, the number of bots in Messenger also grew — from 33,000 to more than 100,000 in just a year. There are also chatbots in WeChat, Slack, Viber, iMessage, and many other platforms.

A survey by Oracle found that 80 percent of senior marketing and sales executives around the world are already using chatbots for their business or plans to use them by 2020. It’s easy to understand why. Chatbots can be used for a wide variety of purposes such as marketing, payments, customer service, and more. They will allow businesses to automate and scale many manual processes and enjoy massive cost-savings. Juniper Research estimated that chatbots will help businesses save up to $8 billion every year by 2022.

According to Business Insider, chatbot adoption is also taking off on the consumer front. More than half of Americans between the age of 18 and 55 have used chatbots before. And consumers seem to be enjoying their interactions with chatbots, too. A survey of 5,000 people by LivePerson found that 38 percent felt positive about their chatbot experiences while only 11 percent felt negative.

6. Businesses can no longer afford to ignore social customer service

The public nature of social media platforms is giving these conversations more exposure. A survey of more than 1,000 people by Sprout Social found that 46 percent of the respondents have “called out” or complained about a business on social media. Furthermore, with the ability to re-share a social media post, such complaints could be amplified and “go viral”.

Ignoring such social media posts can have dire repercussions for your business. Sprout Social discovered that, when shunned on social media, 30 percent of their respondents will go to a competitor and 26 percent will less likely use the company’s product or service. Such consequences help keep businesses accountable, and that’s why social media is now the top channel for customer service.

On the other hand, responding to these social media posts can have several positive effects for businesses:

At Buffer, we use Buffer Reply to listen to, engage, and help our customers on various social media platforms such as Twitter, Facebook, Messenger, and Instagram.

While studies have shown that the average engagement on Facebook has fallen, we were lucky to be able to increase our Facebook engagement by 50 percent year-on-year with some of these tactics.

For the last two years, we (and many others) have been saying that video is the most popular content type. 2018 will be no different.

Buzzsumo’s research on 880 million Facebook posts in 2017 found that video posts have the highest average engagement and twice the level of engagement of other post types on average. We have seen great results with our Facebook videos, too. Our Facebook video views increased by more than 900 percent year-on-year to 2.3 million in 2017 (with the help of a little Facebook promotion).

There are also many pieces of anecdotal evidence of the increasing popularity and importance of video. For example, Facebook and Instagram have been introducing many new video features over the recent years such as live videos and Stories. LinkedIn has also recently introduced native LinkedIn videos.

Marketers are also planning to spend more on video advertising in 2018.According to a survey by Animoto, more than 50 percent of marketers surveyed had planned to increase their spend on video ads on Facebook (63 percent), YouTube (60 percent), Twitter (52 percent), and Instagram (50 percent).

2018 will again be the year of video for social media. Here are some social video marketing tips for you.

With organic reach on social media falling, businesses are looking around for alternative ways to reach their audiences. One of which is user-generated content.

If you were to take a look at some statistics about user-generated content, it’ll be easy to understand why.

Instead of producing their own content all the time, businesses are tapping into the power of their audience (and influencers) and reposting user-generated content, which generates more engagement and trust. By reposting their customers’ social media posts, they are also encouraging more customers to post about their brands on social media, thereby increasing their brand reach.

What other social media trends have you spotted?

As the major social media platforms continue to grow and introduce new features, the social media landscape will only get more exciting. We hope by sharing these ten current social media trends, you can stay ahead of the curve and succeed on social media.