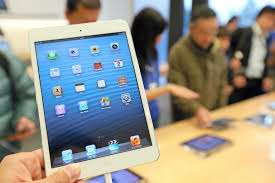 Apple puts upgraded tech guts in a similarly designed body for the iPad Mini with Retina Display and creates a tablet that’s a true miniature version of its bigger brother, the iPad Air

When Apple released its iPad Mini last year, it didn’t receive Retina treatment—a strange move considering many of its products at the time got the high-definition displays. A little more than a year later, this newest model of the downsized tablet gets the update to help appease our pixel-hungry eyes.

Basically, Apple created an miniaturized iPad Air, both in design and hardware. The aluminum unibody chassis is a little heavier than some of its competitors, at more than 12 ounces, and is even a little heavier than the first Mini, though you probably wouldn’t notice. Around its edges are the usual tech trappings—volume rocker, silent/screen rotation lock, 3.5-mm stereo headphone minijack, lightning connector— and the bezel has been slimmed down as on the previous generation. The curved beveled edges give it a comfortable feel, but the 5.3-inch width is a stretch to hold in one hand.

The big news here is the Retina upgrade. With 2048 x 1536 resolution, Apple crammed the same amount of pixels into the Mini’s 7.9-inch display as a full-size iPad, and the 324 ppi just tops Google’s Nexus 7. This screen is mesmerizing. I tested the display with Guillermo Del Toro’s visual spectacle Pacific Rim and completely lost track of time watching Kaiju wreak havoc on humanity in pristine CGI.

The Mini comes stocked with a dual-core, 1.3 GHz Apple A7 chip with 64-bit architecture. It’s a sturdy little device that can stand up to the task of streaming video and playing graphics-intensive games. Even so, while flipping back and forth between apps quickly, it took a moment for some of them to fully load. And for some reason, Notes crashed after I opened it several times and refused to open again.

The 5-megapixel camera is pretty much on par with other mini tablets such as Samsung’s Galaxy Note 8, but the Retina display brings out the most of your photos. The three available modes are photo, square photo and video. Again, nothing very fancy, but enough to snap some decent pictures.

As before, the Mini does not offer expandable storage, though Apple is offering a 128GB model for anyone willing to part with an extra $100 for a step up from the 64GB version. The battery life is comparable to other tablets in its class and can stand up to 9 or 10 hours of solid Web surfing, video watching, and music listening.

Running on iOS 7, the second iPad Mini has some new parlor tricks to make navigation easier. A five-finger pinch gesture while using an app brings you back to the home screen and four-finger swiping from side to side will transition between open apps. Swiping up with four fingers switches to multitask view, which lets you scroll through all opened apps. Chances are you’ll have plenty: The iOS app store is loaded with 475,000 tablet-optimized apps.

Apple isn’t trying to complicate anything with the newest Mini, and the interface remains straightforward and easy to use. The keyboard has great response time and stays with you every step of the way. But if you feel like taking a shortcut, this tablet comes equipped with Siri.

The iPad Mini with Retina Display isn’t groundbreaking, though its a significant improvement from Apple’s first attempt with the Mini. The visual quality is top-of-the-line and the tablet packs much of the tech that turned heads in the iPad Air. But the price can get steep if you want on-board storage space. While the most basic Mini starts at $399, you’ll pay $829 for the 128GB cellular model.